Working in the fast changing world of IT, sometimes is good to stop, take a breather and reflect on where we are and how we got here. Cloud computing is certainly no exception and has had an enormous amount of hype over the past 5 years, but has it lived up to the promise?

I and many others at PDC 2008 listened to the announcement of Azure and the follow up communications as Microsoft went “all in” on the cloud. I particularly remember a set of slides from this presentation that found its way into thousands of other Microsoft sponsored presentations (including mine) around the planet. The abridged message of this early marketing was based on the theory that the elastic nature of cloud should lend itself to a certain set of workloads that are uneconomic to serve on fixed infrastructure. Acronym heavy concepts like TCO, ROI and SLM are used to identify those workloads in your organisation and help build a business case to move them to the cloud.

So 5 years on where are we? Working on the frontline of cloud computing the reality is somewhat different and surprising. While the optimal workloads are certainly still the most economical to move off your on-premise infrastructure, cloud economics isn’t the most important factor, not yet anyway. Here’s my new 20-20 hindsight on that same slide, “Workload Patterns Practical for Cloud”. 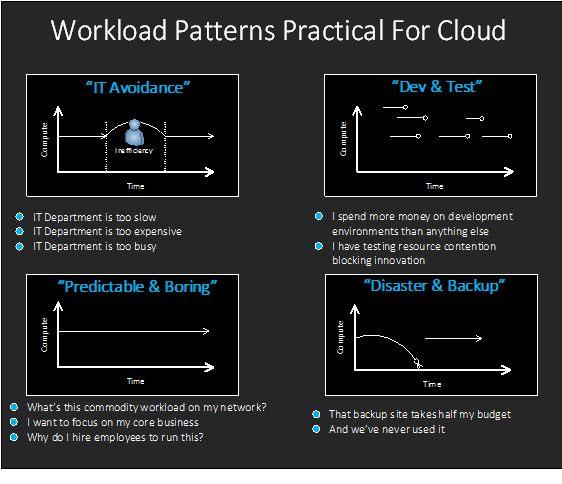 Turns out the ideal workloads for Cloud are somewhat less ambitious and fall into one of the following categories:

Avoiding the internal IT department. We see a lot of this and it’s a conversation started by the business who just need to get stuff done but have been at the mercy of IT departments, project management prioritisation queues and bloated risk averse estimation processes. While all good IT departments should have systems in place to ensure they are serving the business (the money makers) in reality we are seeing a failing of that process and the resulting spill over of IT execution is being picked up by cloud based services outside of the control of IT departments. For example:

While the original cloud sales pitch was all about quickly auto scaling your computations and web sites to solve new problems and serve huge numbers of customers, the reality is quite different. It is the plain vanilla workloads of Email , Intranet, Timesheets and Accounting with its fixed number of users and steady state traffic that is moving to cloud.

Why? It’s easy, the migration path is well trodden and quantifiable. The CIO who needs to reduce CapEx on the balance sheet can fund a large and risky migration of a core line of business system or alternatively take a fixed price migration, remove a rack of servers and a couple of IT head count in the deal. This really makes sense when you think about cloud computing as a utility like electricity. Organisations should be migrating out to cloud services those workloads that are not core business. This is just the beginning of an IT commoditisation process, the end result of which is organisations not in the business of making money from IT shouldn’t have an IT department nor a server room just as they don’t generate their own electricity.

That will take time, but evidentally it will start with the boring workloads first.

At Kloud we moved to a new office space with a dedicated air conditioned server room which now looks like this. The only cold server containment is the beer fridge and the only server is the xBox (actually there is one server left but its life is likely to be short lived). 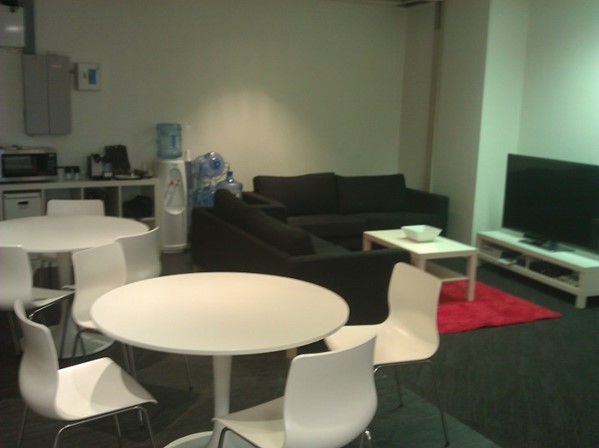 We arguably are a company that makes money from IT and we do indeed have lots of development, test and build servers but they all run elsewhere and only when needed for an individual client or project. The short lived environments are used to replicate or fake everything needed to build a client solution and just as quickly removed.

It has become the norm for organisations to deploy much larger server footprint to support multiple independent development and test streams than that deployed to run production environments. These server farms are typically underutilised and run much longer than they need to.

While not glamorous nor business critical, these environments represent a large proportion of the corporate data centre and are an obvious starting point for moving workloads to the cloud. And since by definition these environments are meant to be isolated, there is no better isolation than the other side of the world in someone elses data centre.

The final workload pattern that is blazing the cloud trail is disaster and backup. Hosting a replica of the corporate production environment and backing up the data to a remote data centre capable of being switched to in the event of disaster. This is a great strategy for that CIO who has until now had to support 2 data centres >50 kms apart for the 1 day in 4 years when a backhoe cuts the Internet link.

This is potentially the most interesting of all the cloud adoption strategies since the disciplines, processes and deployment challenges of running a DR site in the cloud requires the same disciplines as those to run production. Cloud vendors know this and are encouraging the use of cloud platforms for DR and backup strategies and cloud backed storage solutions.

So what now moving forward? Arguably we are at a tipping point for cloud I think for the following reasons:

So Cloud adoption happened but in a different way than would be predicted purely on economics. But it happened. And the formative work is paving the way for a new generation of agile, competitive organisations relieved of the burden of IT.