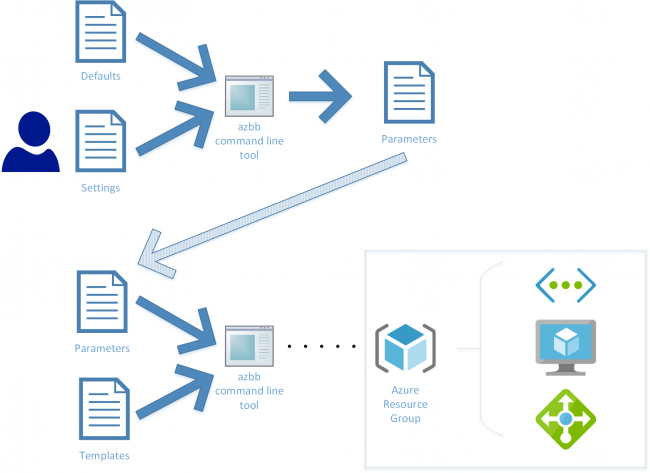 Whilst researching Infrastructure as Code alternatives to Azure Resource Manager templates I stumbled across the Azure Building Blocks (AZBB) tool. It’s not widely adopted and you’ll see why later on this in blog.

Because I’m not keen on authoring large JSON files (aka ARM templates) for IaC I’m going to put Azure Building Blocks to the test with a simple Hub & Spoke VNET deployment. Later on I’ll also demonstrate the same deployment using an AzureCLI script – my current preferred alternative to ARM Templates – so you’ll see the differences.

Note: Before writing this blog I also tested deploying VMs to Azure using the AZBB tool and ran into an issue which turned out to be a blocker for further tests. You can view open/closed AZBB project issues here.

The Azure Building Blocks project is a command line tool and set of Azure Resource Manager templates designed to simplify deployment of Azure resources. Users author a set of simplified parameters to specify settings for Azure resources, and the command line tool merges these parameters with best practice defaults to produce a set of final parameter files that can be deployed with the Azure Resource Manager templates – source: Microsoft Based on the above description – a key advantage behind using Azure Building Blocks is to save you time by merging your JSON parameter files with it’s pre-defined ARM templates as part of it’s deployment flow to Azure.

These pre-defined ARM templates also apply some best-practice defaults such as:

Unfortunately these best-practice defaults are not easily found – so to discover what defaults are applied (and to override them when needed) have a look at the reference wiki for each supported resource e.g. https://github.com/mspnp/template-building-blocks/wiki/Virtual-Machines

For this demo I’m deploying a basic HUB/SPOKE Virtual Network architecture common with production Azure environments where the Hub VNET may contain shared services such as a Firewall, Domain Controllers, JumpBoxes, and an ExpressRoute Gateway.

To run the AZBB tool locally we first need to install NPM/Nodejs so on my local machine I downloaded/ran the Windows x64 client installer from https://www.npmjs.com/get-npm.

Then I ran npm install from a VSCode terminal to setup Azure Building Blocks and then azbb to test the tool was installed correctly. Before we can deploy into Azure we either need to create a new parameter file or use a premade one. To save time I cloned the AZBB repo from GitHub and referenced a premade parameter file matching the demo deployment details e.g. VNETs, TAGS, PEERINGS, DNS SERVERS.

The parameter file we are using (below) is at \template-building-blocks\scenarios\multi-tier\vnet-complete.json. If you are already familiar with using ARM templates you’ll quickly pickup on using AZBB parameter files.

From my VSCode terminal I authenticated into Azure then noted my Subscription ID which I’ll need soon.

Next I ran azbb to kickoff the deployment of the demo deployment referencing the existing .JSON parameter file which we cloned earlier.

After azbb completed running I could see the deployment tasks had succeeded from the Azure Portal > Resource Group > Deployments tab.

azbb switches you should be aware of:

3x deployment artefacts are also generated which you can use for redeployment/troubleshooting/documentation:

To demonstrate the difference with JSON vs azcli I’ve included the exact same VNET architecture deployed above and transferred it to .azcli format so you can see the differences in structure. I can deploy this script directly from a VSCode terminal using the AzureCLI extension for VSCode https://github.com/microsoft/vscode-azurecli.

I find azcli scripting very compact in terms of structure/layout on your screen, making to simplier to deploy multiple Azure resources from the same script. Azcli has also been easier for me to learn/adopt because of the built-in help snippets provided and Microsoft’s wiki.

Azure Building Blocks showed potential as an alternative to ARM templates but I’ve been disappointed by a lack of further development and some ongoing issues with deploying VMs using the tool. The best-practice defaults that are applied as part of the pre-defined ARM templates are a necessary inclusion but we all know Azure is moving faster than the speed at which these best-practice defaults are updated in the templates – which leads you to situations where you’ll need to override these defaults and that’s where things can get painful.

For now I’m sticking with AzureCLI as my IaC tool for deployments.

Would be interesting to hear your thoughts on this.