One of the frustrating limitations in supporting secure websites has been the inability to share IP addresses among SSL websites. In the day, there were a few ways to solve this limitation. One, you could use multiple IP addresses, binding a SSL certificate to each combination of an IP address and standard SSL port. This has been the best method to date but it is administratively heavy and not necessarily a good use of valuable IP addresses. Another approach was to use additional non-standard ports for SSL. While this saved IP addresses, you would potentially run up against strict firewall or proxy limitations making this method undesirable. Finally, in the IIS 7 and 7.5 worlds you could use host-headers to share a certificate among websites but you were limited to a single certificate that each web site would have to share.

Solving this limitation required an extension to the Transport Layer Security (TLS) protocol that includes the addition of what hostname a client is connecting to when a handshake is initiated with a web server. The name of the extension is Server Name Indication (SNI). Of course, extending the definition of a protocol is never as easy as updating an RFC. Both client and server compatibility are required to make use of these extensions. On the client side, roughly 95% of browsers support SNI. Specifically those are:

In the Microsoft world, support for the SNI extensions to TLS were introduced with Windows Server 2012 and IIS 8.  Through the Internet Information Services (IIS) Manager and a web sites bindings UI, SNI can be specified for a HTTPS site along with a host header: 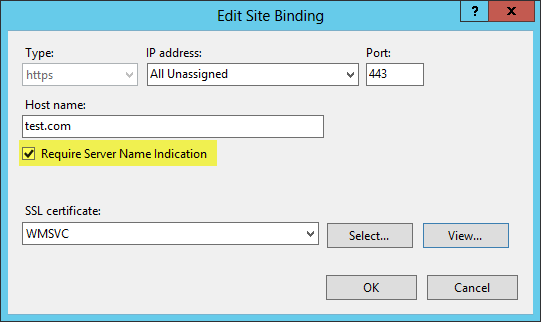 There are many resources on the Internet that deal with setting up and configuring a site using SSL bindings as well as utilizing SNI from within the IIS Manager.  Where I’d like to focus the second part of this blog is in creating SNI web-bindings using PowerShell.  As a driver for implementing SNI is the scalability it provides, this scalability might be for naught if not coupled with the ability to deploy a solution without the use of a GUI.

There are three parts to successfully assigning and associating any SSL binding with a website through PowerShell:

Creating the web site binding is a straightforward process.  The following PowerShell sequence would be used to create the binding and assign the correct port, host header and specification for use of SNI:

The name specified would be the name of the web site you’d like to add the binding to.  The protocol and port are standard for SSL bindings.  The host header is the URL you’d like the web site to respond to.  Finally, SslFlags with a value of 1 enables SNI for this binding.

In order to retrieve the thumbprint of a certificate the following PowerShell command is used:

In the above example the friendly name of the certificate is used as the matching context.  One could also use the subject instead.

In order to get a reference to the certificate itself the following syntax can be used:

The final step in the puzzle is tying together both the binding and the certificate.  This can be the trickiest part to get right.  PowerShell doesn’t provide a native cmdlet to directly do this. Instead, one needs to use the IIS drive exposed by the WebAdministration module to create a SslBinding object and associate that object with the certificate.

The PowerShell sequence for that task is as follows, if you’re using the certificate object:

If you’re using the thumbprint your command would be:

If successful, you should receive confirmation displaying the host name, along with the site the host name is bound to.  To confirm that SNI is in use run the following command from the command line: 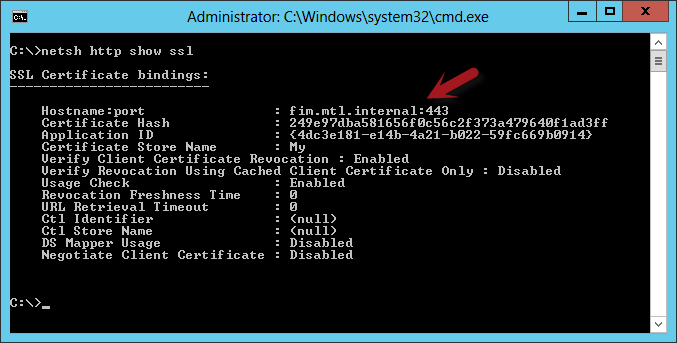 In the above, notice the SSL binding is using the hostname:port syntax which confirms SNI is in use.

Following the above steps will allow you to take advantage of the new Server Name Indication (SNI) implementation in Windows Server 2012 and IIS 8.