In the Visualise Azure Table Storage with Excel and Fiddler I described how to use Fiddler as a handy proxy that can be used to inject the protocol differences between standard oData and the non-standard oData supported by Azure Table storage. While Fiddler is a handy desktop tool to illustrate the solution, it is not really appropriate as a part of a system architecture. A simple request to host the same Azure Table Storage to oData functionality as a hosted service lead me down a long and windy road in the world of WCF, but one worth documenting.

What Fiddler really provides is a local proxy through which requests route before leaving the client and responses route through before being returned to the browser. A hosted solution requires something slightly different, a router with the ability to take requests from one URL and serve them from another URL. Additionally we need the router to do content inspection and URL rewriting so that the content returned to the client directs requests back through the router.

So take a look at a couple of design options and building blocks to make sure there’s nothing obvious that already does it:

I covered briefly the use of Application Request Routing as a router in the Publish Content to the Azure CDN with UrRewrite blog. URLRewrite and ARR working together makes a great router. It’s a powerful and high performance way to direct traffic intended for one location to another location while modifying the request and potentially the response along the way. While the URLRewite part is powerful, it is not possible within the constraints of the regexp based rules and simple plugin model, to implement the kind of rich functionality required to create the Azure security key we need.

An HttpModule very neatly plugs into the IIS pipeline and gives us the opportunity to write powerful .NET code to affect the request on the way through, and potentially (when the requesting Url is changed), hand off to ARR to forward the request “off-box” and route the response back through. There are a few tricks to getting this to work.

Firstly working in the IIS pipeline can be a tricky business. It’s important to remember you are working with streams of data, not strings or collections. The act of reading the stream can have an impact on those that come after you in the processing stack. And when operating between IIS native pipeline (where ARR operates) and .NET integrated pipeline (where HttpModule operates), it’s not obvious when the stream is being read. A simple statement such as this:

Actually permanently affects the incoming stream in a way that makes it unable to be processed back at the native pipeline level. Certain .NET statements lift the stream out of IIS at certain points and surfaces it in a .NET interface, which prohibits further stream processing at the native level. To address this issue, .NET 4.0 now has the request.InsertEntityBody(). This method call will put a copy of the request back into the native pipeline in IIS so both APIs can operate on the streams. That means that after any change to the request a call to request.InsertEntityBody() needs to be made to pass that change back to IIS.

There are further complications when working with stream. To implement the addition of the oData paging <link> requires the module to look in the response stream for the headers and render a new link in the response body using those values. That means buffering the response reading the just the headers and then performing a replace before Flushing the stream. It can be done (I think) but the question is, do we need all the complexity of IIS and URLRewrite, ARR and HttpModule?

WCF abstracts the notion of communication away from the hosting platform, message protocol and formats. Sure you can still use IIS to host a WCF service, but you don’t have to. WCF can be hosted in its own service listening on a certain ports and acting on messages arriving on them. WCF can be used as a transport and message agnostic router which provides everything that IIS, URLRewrite, ARR and HttpModule do together. So WCF looks promising and is worth a closer look.

First stop on the WCF trail is the new and very promising sounding WCF 4.0 Routing Service! This looks like it’s exactly what we need, but before going much further there is a statement in the documentation that says “The Routing Service does not currently support routing of WCF REST services. To route REST calls, consider using System.Web.Routing or Application Request Routing”. Huh! Back to ARR? Why WCF would single out REST to not be supported. In the interests of not fighting the available technology, rather than look much further into getting around that limitation, I decided to believe the doco, bin it and move on.

What about building our own router using WCF.

Michelle covered the basics in her 2 part blog “Building a WCF Router” which has all the basic building blocks and concepts which we can build upon. With a start like that, surely this can’t be too complicated? Next, Bing and Google madly to see if anyone has done it already which reveals these valid attempts:

We’ll use this basic construct and add Routing, Rewriting and WCF Behaviours to plug in the additional features (including oData/Azure Table Storage authentication functionality later). But before implementing any further let’s pause for a moment and look at how each of these WCF components comes together to solve the problem.

In designing the Router I wanted to store no state at the Router. That is everything requires to act on a message has to be available in the message or available message context. That means there are certain points where we need to save Urls and set properties on messages to carry additional information.

So it’s time to start coding starting with the simplest possible router which has a single method that accepts any Message and responds with a Message.

First question we need to resolve is how to tell the router where to route to. This is often done with Http headers or similar, but since we are hoping to support vanilla REST and oData clients (like Excel) there is no opportunity to insert headers so I’ve chosen to use the URL. Specifically the first Uri path segment after the domain is mapped to the service URL.

Next we come up with a strategy for registering and unregistering routes. Ideally I’d like to support registration at runtime (using REST) so take control of a couple of special Router URLs.
http://router.cloudapp.net/register?name=netflix&routeTo=odata.netflix.com&type=Route“
Will enable the previous route; and similarly for unregister
http://router.cloudapp.net/unregister?name=abc
(The Type parameter is used to describe the type of routing and will be described later.)

The routing part is very simple in WCF. Before passing a message onto the WCF runtime with ProcessMessage, simply rewrite the “To” Header by replacing the routerUrl with the destination service Url and WCF will do the rest (no Application Request Routing complications here).

So we can successfully forward messages onto configured endpoints and get responses. The problem is the responses (as is the case for web pages and REST/oData) will contain Uri’s for the originating service so that subsequent requests will go direct to the service and not via the router. What we need to do is look for any service Uri’s in the returned content and replace with the Router address. This can be done with a WCF behaviour using IDispatchMessageInspector and IClientMessageInspector to pick up the Urls from the message and meet up in BeforeSendReply to modify the reply just before sending it back to the client.

With any WCF solution the devil is in the config. To make the behaviour magic happen we use configuration to add the service behaviour before the Router

And add the client behaviour after the Router

To support the different possible routing behaviours we use the “Type” parameter on registration. The value of Type is used to select the name of the client endpoint, which in turn chooses the set of behaviours to be applied on the service side of the router.

Now we’ve built a generic rewriting router with a registration model. But the real goal here is the ability to register and plugin additional WCF behaviour extensions, so…

Back to the original problem which is Azure Table Storage requires authentication keys to be sent with the request. That means the client endpoint we use to request data from table storage needs an additional behaviour too to modify the request outgoing from the router to table storage. 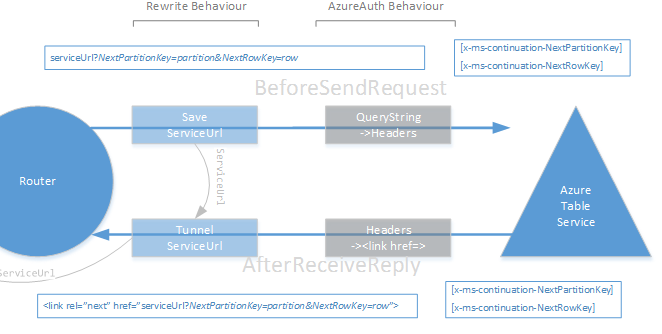 This is a slightly different behaviour as it is the router acting as a service client and so is and modifying the request using an implementation of IClientMessageInspector.BeforeSendRequest
and adds headers onto the outgoing webrequest.

One last piece of the puzzle is the oData <link> element. This is an additional element that needs to be added to reply from table storage to implement paging. This replaces the header based implementation used on table storage replies with the standard oData method of a link Uri to the next page. Again a custom behaviour can help here on the router client side, but this time implementing IClientMessageInspector.AfterReceiveReply. This method gives us the opportunity to replace the message contents returned from table storage with a new oData compliant one including link elements (which will be rewritten to be routed through the proxy by our earlier rewrite behaviour).

While all that looks dead simple, one very important note when implementing this extra Azure behaviour (that took a lot of debugging). The responses coming back from Azure table storage have a header that can be seen in Fiddler.

When using WCF to change Messages, it is important to create a new copy of the Message and copy across all of the Properties and Headers from the old message. It turns out that the act of copying the message means it is no longer “chunked” so that header must be removed before passing the Message back through WCF. If you don’t remove the header, no Message body is returned and no error is either.

To properly handle the new AzureAuth routing ability, we need one more piece of information, the StorageKey to be associated with a given route like so.

The power of WCF is it can be hosted pretty much anywhere. For the most flexibility it is best hosted on its own where it can take over the entire Url space so any Url can be served. However IIS is also an option but requires the use of an annoying .svc extension in your router Urls. I’ve done both and the Router service is happy either way. It can be deployed into Azure as a WebRole, a WorkerRole(with some additional effort) or for purposes of this example hosted in Azure Web Sites for anyone to try.

Try out the Netflix router with Urls like http://tablerouter.azurewebsites.net/Router.svc/netflix/Catalog/Languages(). Here we are browsing the oData of the Netflix catalog but using our Router to serve the content.

Then finally get an Azure Table Storage Url and Connection String and register your own route.

This brings us back to the original request. How to view Azure Table Storage using Excel. As per the original Fiddler based blog, follow the same steps.

A note on Security

A note on security; what we have done with the oData proxy is to remove the need for vanilla oData clients (like Excel) to know and understand the nuances of the Azure Table Storage security keys. But to do that we’ve had to give the Router the ability to impersonate a secure client by given it your security key information which is kept in memory on the Router. You now have a publicly accessible Url to your view.

The code is available here with some additional bits and pieces for hosting in WebRoles and WorkerRoles
[office src=”https://skydrive.live.com/embed?cid=E7F2E3C8DA56735E&resid=E7F2E3C8DA56735E%213787&authkey=AKuhCBFGKTk3Rio” width=”98″ height=”120″]