What this allows is persistent Virtual Machines (which retain the same private addresses) running in Azure that can be joined to your on-premise Active Directory using a site-to-site IPsec VPN. The Azure VMs then act like a branch network with full connectivity and you can add Domain Controllers in the Azure Virtual Network.

This is still a preview release and Microsoft currently only support specific Cisco and Juniper devices that have been tested. The VPN Devices for Virtual Network page explains that other devices may work as long as they support the following:

TMG 2010 does support these requirements but getting full connectivity working has proven to be harder than expected. Hopefully this post will save others a lot of time.

The first step is to create the Azure Virtual Network and Microsoft have a good tutorial explaining it here.

If you will be deploying Active Directory into your Virtual Network, you cannot use Azure DNS and will need to provide details for your AD DNS. More information is available here.

It is important to note that once you have created the Virtual Network and deployed a Virtual Machine the configuration cannot be modified, other than adding subnets. Hopefully this is something that will be available once these services are out of beta.

Starting the gateway can take a long time. I haven’t seen any documentation on how it works, but I suspect it is spinning up a VM in the background to act as the Azure VPN endpoint. Once the gateway is created, take note the IP address and Shared Key and we can move on to the TMG configuration.

During the setup of the TMG VPN I had a few times where I thought I had it working only to hit another stumbling block. The summary of the things I needed to change are:

I used the content of this massive MSDN forum post to create the IPsec site-to-site VPN and get traffic flowing with the TMG configuration information coming from David Cervigon.

Below is the TMG IPsec configuration. 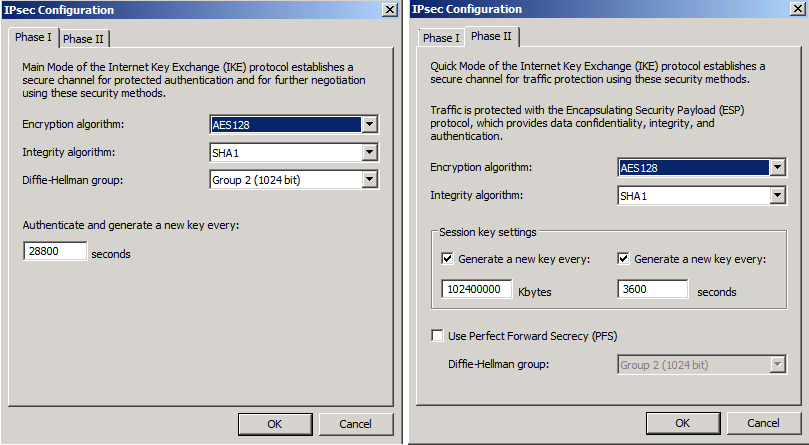 Below is the TMG configuration. At this point I could see the VPN connect:

However no traffic was flowing. I was running TMG 2010 SP 1 Software Update 1 and after installing hotfix KB2523881 the VPN worked. I tried to install the hotfix on another TMG server with SP 2 and all Windows Updates and it said it was not needed. (Update 26 July: tcpip.sys and fwpkclnt.sys are updated by Windows hotfix KB2582281 and MS12-032 KB2688338 )

At this point I could add my first virtual machine, join it to the domain but could not get AD to replicate from on-premise to Azure. The issue was the MTU on the external network card on TMG which was mentioned somewhere in the MSDN forum above. The MTU needs to be set to 1350 to account for the IPsec overhead and the default is 1500.

Below is a screenshot of the change.

Almost there. The issue I faced now was that my Virtual Machine Domain Controller could not use any DCOM RPC services like certificate self-enrolment and opening the Certificate Authority MMC. TMG blocks all non endpoint mapper RPC traffic like DCOM – more information is available here. I tried disabling RPC strict compliance, changing the DCOM port and creating a custom rule as shown here but it did not work. I eventually tried to disable the RPC filter completely in System / Application Filters which, although drastic, did work. The reason it worked is because it forces a restart of the TMG Firewall service which it turns out is all that was needed to apply the previous configuration changes. I re-enabled the RPC filter and set the DCOM back to standard ports and from my testing the following is needed:

That should be all that is needed. Not particularly hard but getting all the information and testing took a long time. I hope that this helps somebody and prevents a lot of wasted time.

The next blog will cover PowerShell provisioning the first Domain Controller in Azure so that it can join the on-premise domain and adding other domain joined machines.