In an application with a lot of business logic, unit testing may get us most of the way to verifying the code’s quality. But Azure Functions code often involves pieces of functionality that can’t be easily unit tested. For example, triggers, input and output bindings are very powerful features that let us avoid writing boilerplate code to bind to HTTP requests, connect to Azure Storage and Service Bus blobs, queues, and tables, or building our own timer logic. Similarly, we may need to connect to external services or databases, or work with libraries that can’t be easily mocked or faked. If we want to test these parts of our Functions apps then we need some form of integration testing.

Integration tests involve running code in as close to a real environment as is practicable. The tests are generally run from our development machines or build servers. For example, ASP.NET Core lets us host an in-memory server for our application, which we can then connect to real databases, in-memory versions of systems like the Entity Framework, or emulators for services like Azure Storage and Cosmos DB.

For the purposes of this post I’ve written a very simple Functions App with two functions that illustrate two common use cases. One function (HelloWorld) receives an HTTP message and returns a response, and the second (HelloQueue) receives an HTTP message and writes a message to a queue. The actual functions themselves are really just simple placeholders based on the Visual Studio starter function template:

In a real application you’re likely to have a lot more going on than just writing to a queue, but the techniques below can be adapted to cover a range of different scenarios.

While you could use any test framework you like, the sample implementation I’ve provided uses xUnit.

The xUnit framework provides a feature called collection fixtures. These fixtures let us group tests together; they also let us run initialisation code before the first test runs, and run teardown code after the last test finishes. Here’s a placeholder test collection and fixture that will support our integration tests:

The code is fairly self-explanatory: during initialiation it reads various paths from configuration settings and starts the process; during teardown it kills the process and disposes of the Process object.

I haven’t added any Task.Delay code, or anything to poll the function app to check if it’s ready to receive requests. I haven’t found this to be necessary. However, if you find that the first test run in a batch fails, this might be something you want to consider adding at the end of the fixture initialisation.

Some of the code in the above fixture file won’t compile yet because we have some configuration settings that need to be passed through. Specifically, we need to know the path to the dotnet.exe file (the .NET Core CLI), the func.dll file (the Azure Functions host), and to our Azure Functions app binaries.

I’ve created a class called ConfigurationHelper that initialises a static property that will help us:

The Settings class is then defined with the configuration settings we need:

Then we can create an appsettings.json file to set the settings:

That’s all we need to run the tests. Now we can write a couple of actual test classes.

You can write your integration tests in any framework you want, whether that be something very simple like pure xUnit tests or a more BDD-oriented framework like SpecFlow.

Personally I like BDDfy as a middle ground – it’s simple and doesn’t require a lot of extra plumbing like SpecFlow, while letting us write BDD-style tests in pure code.

Here are a couple of example integration tests I’ve written for the sample app:

This test simply calls the HTTP-triggered HelloWorld function and checks the output is as expected.

Now we can compile the integration test project and run it from Visual Studio’s Test Explorer. Behind the scenes it runs the .NET Core CLI, starts the Azure Functions host, executes our tests, and then kills the host when they’re finished. And we can see the tests pass! 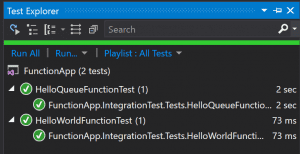 Getting the tests running from our local development environment is great, but integration tests are most useful when they run automatically as part of our continuous integration process. (Sometimes integration tests take so long to run that they get relegated to run on nightly builds instead, but that’s a topic that’s outside the scope of this post.)

Most build servers should be able to run our integration tests without any major problems. I’ll use the example here of Azure Pipelines, which is part of the Azure DevOps service (and which used to be called VSTS’s Build Configurations feature). Azure Pipelines lets us define our build process as a YAML file, which is also a very convenient way to document and share it!

Here’s a build.yaml for building our Azure Functions app and running the integration tests:

The three key parts here are:

When we run the build, we can see the tests have run successfully:

And not only that, but we can see the console output in the build log, which can be helpful when diagnosing any issues we might see: I’ve found this approach to be really useful when developing complex Azure Functions apps, where integration testing is a part of the quality control necessary for functions that run non-trivial workloads.

Remember you can view the complete code for this post on GitHub.

Update: A second post, adapting this method to test timer-triggered functions, is now available too.