There are many ways to install Office Pro Plus to your client base. You can let the user install it from the web, push it out via SCCM or Intune or simply provide the user with an installation package. However, every now and then you come across some special requirements where security is tight and some options are not available for various reasons. In this post I show you how to deploy Office Pro Plus to client machines where users do not have administrative access.

In one of my recent projects, I was tasked to help a client deploy a POC for Office Pro Plus via Click-To-Run. The company has a few thousand client machines and these are secured following best practice;  users do not have admin rights on their PC’s, PowerShell execution policy is set to restricted and UAC is enabled.

The company uses a non-Microsoft enterprise software distribution tool, however this is managed by a third party and due to time constrains Office Pro Plus should be deployed with a different method. Because of the existing investment in the tool, other deployment tools like SCCM and Intune where also out of the question.

And to make it just a bit more challenging the client wanted to:

I am assuming that you already know how to download, customize and install Office Click-To-Run. After some testing and several trials we implemented the following Procedure.

A new Security Group and GPO was created

To be able to use the account within a script I needed to create a password hash with a secure key. This will later allow me to run the 2nd batch file evaluated as the service account.The PasswordHash was created via the below PowerShell commands

After the users activates the link on his desktop a batch file while be executed. The first batch file will

Note: Initially I wanted to use a PowerShell script instead of the batch file, however this would have presented a UAC prompt for elevation. By using PowerShell –command I was able to get surpress the UAC prompt.

The second batch file, which runs as the service account, now executes the Office Pro Plus setup routine and delete the temporary files after the deployment.

After the user was added to the Security Group and GPOs have been refreshed the user will find a new icon on their desktop: 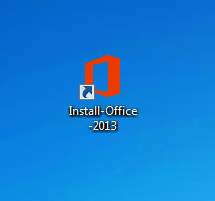 After launching the file the user will see a command prompt 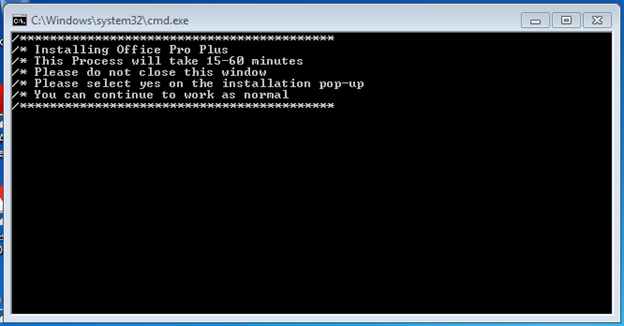 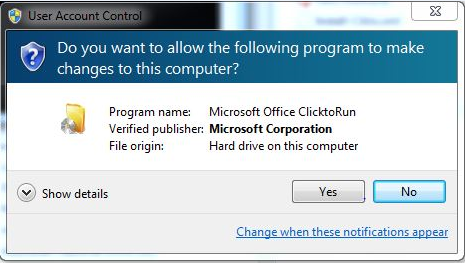 Once the user clicks “Yes”, the deployment process will complete within 15-60 minutes depending on PC and network performance.

About me | Email me | LinkedIn