The announcement from Microsoft TechEd North America early in June that got me really interested was the Windows 2012 R2 Web Application Proxy which was described as:

The Web Application Proxy is a reverse proxy and ADFS (Active Directory Federation Services) Proxy that also provides functionality like Workplace Join for Windows 8.1 using the Device Registration Service (DRS). I have a particular interest in the reverse proxy side having done a lot of work with UAG lately which makes me miss TMG! As discussed in my previous blog Publish Lync 2013 Including Mobility and Office Web Apps with UAG 2010, with TMG disappearing the only Microsoft product (other than IIS with ARR) with reverse proxy functionality is Microsoft Forefront UAG (Unified Access Gateway).

UAG development seemed to have slowed down and the latest Service Pack added support for Exchange 2013 and SharePoint 2013 but not even Lync 2013 that came out at the same time. No word has been heard about any future development and with people like Erez Ben Ari (Ben Ari on TechNet) moving to the IIS team it seems like the writing is on the wall for Microsoft’s Forefront TMG and UAG products. UAG is a very powerful product but is hamstrung by its legacy roots in e-Gap and IAG and reliance on TMG underneath. TMG is not supported on Windows 2012 so if it was to move forward a total rewrite would have been needed.

A session at TechEd North America titled Enable Work from Anywhere without Losing Sleep: Remote Access with the Web Application Proxy and VPN Solutions showed off some of the functionality (video and slides available at the link) and the same session at TechEd Europe last week WCA-B333 came out with a lot more information that I only saw after I started testing unfortunately. There is now a single TechNet page dedicated to the Web Application Proxy http://technet.microsoft.com/en-us/library/dn280944.aspx

The Web Application Proxy (WAP) is a Role Service under the Remote Access role of Windows 2012 which also includes DirectAccess, VPN and routing services. It can provide simple reverse proxy functionality using ‘Pass-through’ where no preauthentication is performed, or provide Active Directory Federation Services (AD FS or ADFS) authentication by performing the ADFS proxy function. Note that even in Pass-through mode, WAP needs a Windows Server 2012 R2 Preview ADFS farm and must be setup as an ADFS Proxy. Without ADFS you can’t even complete the configuration wizard. Pass-through and ADFS federation to claims aware applications can be performed like previous AD FS proxies as a workgroup machine in the DMZ.

The reverse proxy functionality that seems like it could be a TMG/UAG replacement is the ability for the WAP to provide preauthentication for non-claims aware backend applications. It takes ADFS authentication and initiates a new session to the backend server providing Single Sign On (SSO) across multiple backend applications. This was possible with UAG by modifying applications to use the Claims to Windows Token Service (C2WTS) as described in Access OWA with ADFS, but the promise of this new functionality is that no modification is required on the backend service.

In my testing though, it wasn’t as simple as this as NTLM and Basic did not work for rich clients – even in pass-through mode (Update: for ActiveSync this is fixed by adding a default SSL binding as ActiveSync does not support SNI) . Slide 40 on the same presentation states that UAG will still be supported until 2015. Additionally it says that the Web Application Proxy is ‘part of a broader BYO Access platform alongside AD, AD FS, Intune’ and ‘We are not building all of UAG functionality into Windows Server’, so it looks like Web Application Proxy may not be a total replacement for UAG.

There is very little documentation right now for the Web Application Proxy so the following are my observations and assumptions based on testing Windows Server 2012 R2 Preview in Windows Azure. That meant I could only have a single network card (a restriction of Azure) and I don’t know if that would change any functionality (as it would for TMG and UAG).

The first important thing to note is that any preauthentication or ADFS proxy functionality requires Windows Server 2012 R2 ADFS on the backend. So for anything other than Pass-through, ADFS is a hard dependency. It was mentioned that the recommendation now is to run ADFS on a domain controller and ADFS seems to be taking over as the primary authentication mechanism for all Windows applications. Additionally a schema upgrade will be required to support all of the device registration functionality.

The second important thing to know is that in order to do preauthentication to backend applications, the WAP must be domain joined as Kerberos Constrained Delegation (KCD) is required. In the past ADFS proxies were not domain joined and the WAP can act the same way as long as KCD is not needed.

Setup a Domain Controller and add the ADFS role. Add a ‘Non-Claims-Aware Relying Party Trust’ for the Exchange CAS or CAS Array as can be seen below.

For the Issuance Authorization Rules, either ‘Permit All Users’ or you can limit who can authenticate through ADFS (and the Web Application Proxy) using Active Directory attributes. In this example I have created an AD group that allows access through the WAP. In the Issuance Authorization Rules, specify ‘Permit or Deny Users Based on an Incoming Claim’, specify ‘Group SID’ and select the relevant group. This allow the full flexibility of ADFS claims rules which can include specifying IP subnets, whether people are coming through the ADFS Proxy and many more.

Join the computer to the domain and install the Remote Access Role, and the Web Application Proxy Role Service. Import the ADFS public certificate and any other certificates required for publishing. As with Server 2012, 2012 R2 supports Server Name Indication (SNI) which was covered previously on the Kloud blog An Overview of Server Name Indication (SNI) and Creating an IIS SNI Web SSL Binding Using PowerShell in Windows Server 2012. This allows multiple certificates to be used on a single IP and port combination, which is a great improvement over TMG and UAG.

Start the Web Application Proxy configuration wizard and setup the server as an ADFS proxy. Specify the Relying Party from the list of enabled Relying Parties configured on the on-premise domain joined ADFS farm server.

Setup the external and internal URLs and SPN for the internal web server. The publishing can either be a specific path or the whole server, however unlike TMG there is no ordering of applications so if you publish a whole server you cannot add a sub path as a higher rule. In this case I have published Exchange OWA and ECP as separate applications. 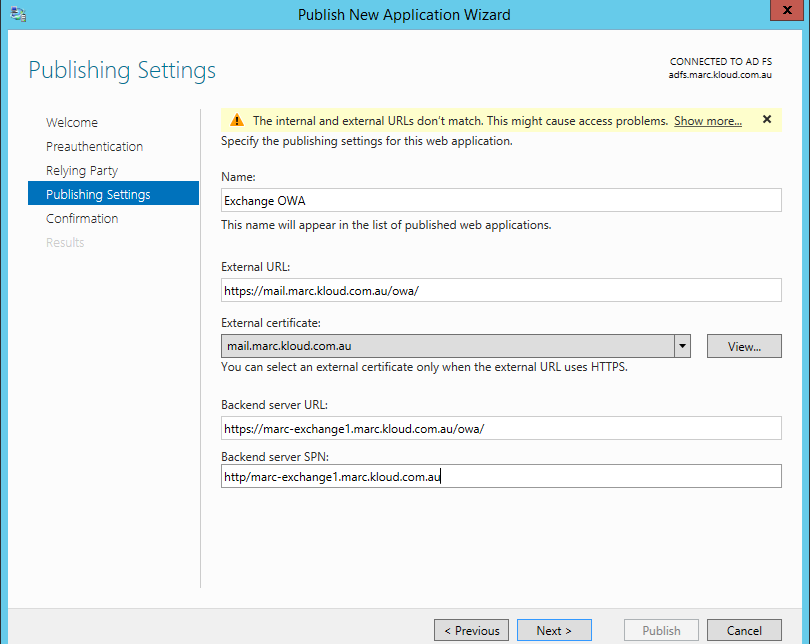 For the ECP application I can create it with PowerShell:

The final task is to setup KCD to allow the WAP to impersonate the user and obtain a Kerberos ticket to access the Exchange CAS. This is done by editing the WAP computer object and allowing delegation to the Exchange CAS SPN, or CAS Array Alternate Service Account user or computer object. A PowerShell function for this is provided in my previous blog post Outlook Anywhere NTLM SSO with UAG 2010 KCD Browse to the OWA URL e.g. https://mail.marc.kloud.com.au/owa/ which redirects to

Logging in with a domain user who is not a member of the ‘WAP Allowed’ group gives a friendly error: This allowed a new Outlook profile autodiscover to work but Outlook just hangs on the ‘Logging on to the mail server’ for a few minutes and fails to connect. I tried to change the Exchange internal and external URLs to be same to make sure the lack of body rewriting in WAP wasn’t causing the problem. I published the root of the server https://mail.marc.kloud.com.au/ and autodiscover https://autodiscover.marc.kloud.com.au/ in Pass-through mode but still could not get Outlook Anywhere or ActiveSync to work initially (Update: ActiveSync does not support SNI, so in order to make it work a default SSL binding must be added as mentioned in my post about Lync Publish Lync 2013 with 2012 R2 Preview Web Application Proxy). Possibly this is something in my configuration as according to the slide above, NTLM and Basic authentication should just work in Pass-through mode. If somebody else gets Outlook Anywhere to work, please let me know. (Update: according to a member of the Web Application Proxy product group there is a bug in the Preview version that prevents Outlook Anywhere from working. They say it will be fixed in the RTM version).

Just to round out the testing, I used the WIF SDK 3.5 sample claims app ‘PassiveRedirectBasedClaimsAwareWebApp’ and configured it on a Windows 2012 R2 server using the process described in the ADFS and SSO lab setup guide. Create the Relying Party Trust as described in the documentation.

On the Web Application Proxy, add an ADFS preauthenticated application based on the ‘Claims App’ RP and configure the external and internal URLs The end result is the published application: 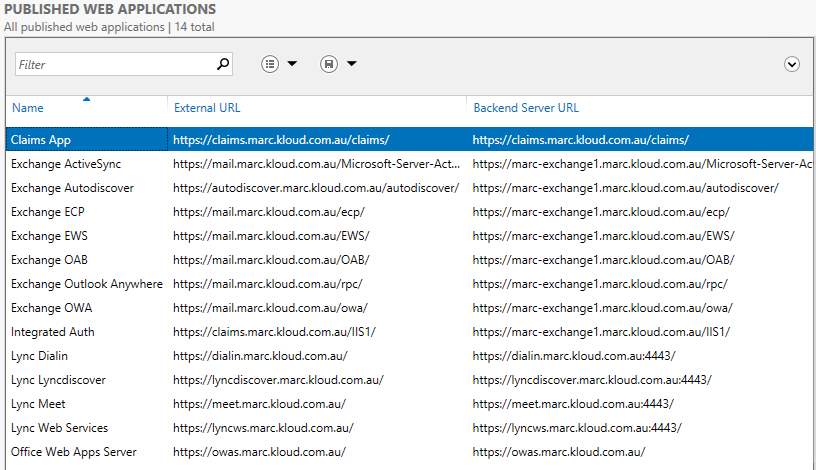 Logging on from an external client shows the claims that the client has in the ADFS security token. Opening other ADFS preauthenticated applications provides SSO as the client has a valid ADFS cookie and a valid Web Application Proxy cookie.

This is a preview release that is probably 6 months out from final release, so many things may change before RTM. With very little documentation I am guessing my way through some of the scenarios and configuration, so don’t take this a final analysis of the product.

The Bad aka ‘Hopefully will be added or fixed’

I would also like to see the ability in the console and WAP PowerShell cmdlets to set a default SSL binding certificate for non-SNI supported browsers so it doesn’t have to be done via netsh.