In this post I will be talking about gulpjs api and how gulp can be useful in automating deployment tasks. In a greenfield project there are a lot of post development tasks that a developer has to focus on besides development and with CI/CD being in focus now, post-deployment tasks are expected to be automated to make deployment pipeline more consistent and repeatable. These repetitive and common tasks not only adds-on to the project time and effort for the developer but also takes the focus away from the primary task.

In JavaScript ecosystem there are many tool libraries which help’s the developer with various coding tasks. One of the common one is the Linting libraries which are helpful during the development phase. A good linting tool will capture the unhandled error early and can also help make sure a project adheres to a coding standard. Out of the toolkit repository another useful one is the task runner which help automate certain time consuming tasks which have to be done over and over again.

Task runner tools are used to automate those repetitive and time consuming tasks.

Gulp is just another tool out of the javascript toolbox which is used as a stream build system, it is JavaScript based task runner that lets you automate common tasks in a very simple manner.

Gulp passes files through a stream and it starts with set of source files, process those files in the stream and delivers the processed output out of the stream. Gulpjs APIs are used to handle input, alter and deliver output during different phases. In this post, i will focus on is gulp.tasks , gulp.src , gulp.dest and gulp.watch. In most scenario’s with project deployment constant value or configuration variables have to be managed based on the environment or files need to be updated or inject certain html during build time. This is where gulp api’s can be handy to automate those repetitive tasks in a consistent way. Gulp helps to improve quality, deliver faster and provides better transparency and control over the processes.

Gulp.task (name , [,dep] , fn) : As you can see in the task signature Gulp task takes three parameters the first parameter defines the name of the task “customTask” then if next one i.e dependencies is optional so only if there are any dependencies which needs to be passed in can be added or otherwise the last parameter is the callback function.

In the code snippet below after the task definition next the “.src” takes in the path of the files to be parsed. Once source has the files then it is piped to the next step to alter the files. In this example it is performing minify action on the js files and in the last step it will pipe them in the destination path defined in the gulp.dest.

More steps can be added to the pipe here to alter the files or perform more action on the files before passing them to the gulp.dest.

Gulp.src : gulp.src(glob[,options]) : gulp.src looks for source pattern match for the files that we want to pass to the stream and gets them.

Gulp.dest : gulp.dest(folder[,options] ) this api is used as to where we are going to send our files to after files have been altered in the gulp pipeline.

Gulp watch: gulp.watch(glob,[options,callback]) : looks for when an event/change happens on the file system matching glob string or array parameter. If watcher notice a change in the files which match the path mentioned in the glob parameter, then it will execute a task or series of task from the task array in this case it is task1 and task2. If required a callback function can also be added instead of passing in the tasks array.

I will stick to the earlier example to update the configuration variables during deployment. We can consider here an SPFx project to understand that. Web parts usually have constant values that are being used across by different methods and value of the constants change with the environment they are being deployed. In order to make sure it is consistent with the build and to make it more robust we can use the gulp task to define build task.

//files path read by the gulp source command above, it will look for *.base.json files on the folder path below 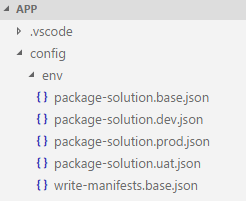 In the code snipped above a custom task is added to the pipeline as “SetConstants” and an “env” parameter is passed to the callback function. As the task command is run it will read the file in the source path defined i.e. “config/env” folder and pipe the files to the function or another task to alter the file. Once files are altered they can be send to destination using the gulp.dest api.

This will help with updating those repetitive tasks and automate the deployment pipeline.

Hope this helped in getting understanding on Gulpjs APIs in project to automate tasks during deployment. Happy Coding!!