Agility in delivery of IT services is what cloud computing is all about. Week in, week out, projects on-board and wind-up, developers come and go. This places enormous stress on IT teams with limited resourcing and infrastructure capacity to provision developer and test environments. Leveraging public cloud for integration DEV/TEST environments is not without its challenges though. How do we develop our interfaces in the cloud yet retain connectivity to our on-premises line-of-business systems?

In this post I will demonstrate how we can use Microsoft Azure to run Mule ESB DEV/TEST environments using point-to-site VPNs for connectivity between on-premises DEV resources and our servers in the cloud.

A point-to-site VPN allows you to securely connect an on-premises server to your Azure Virtual Network (VNET). Point-to-site connections don’t require a VPN device. They use the Windows VPN client and must be started manually whenever the on-premises server (point) wishes to connect to the Azure VNET (site). Point-to-site connections use secure socket tunnelling protocol (SSTP) with certificate authentication. They provide a simple, secure connectivity solution without having to involve the networking boffin’s to stand up expensive hardware devices.

I will not cover the setup of the Azure Point-to-site VPN in this post, there are a number of good articles already covering the process in detail including this great MSDN article.

A summary of steps to create the Point-to-site VPN are as follows:

Once we established the point-to-site VPN we can verify the connectivity by running ipconfig /all and checking we had been assigned an IP address from the range we configured on our VNET.

In our demo, we want to test the interface we developed in the cloud with on-premises systems just as we would if our DEV environment was located within our own organisation

The flow above listens for HL7 messages using the TCP based MLLP transport and processes using two async pipelines. The first pipeline maps the HL7 message into an XML message for a LOB system to consume. The second writes a copy of the received message for auditing purposes. 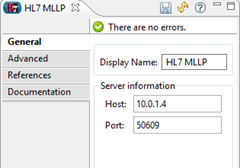 To test our flow we launch a MLLP client application on our on-premises server and establish a connection across the point-to-site VPN to our Mule ESB flow running in the cloud. We then send a HL7 message for processing and verify we receive a HL7 ACK and that the transformed xml output message has also been written to the configured on-premises network share location.

Establishing the connection across the point-to-site VPN… 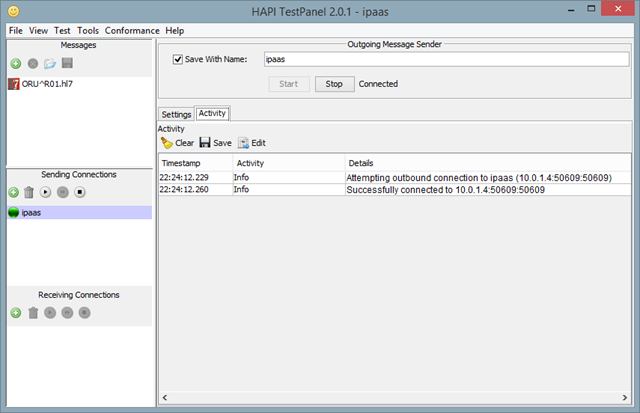 Sending the HL7 request and receiving an HL7 ACK response… 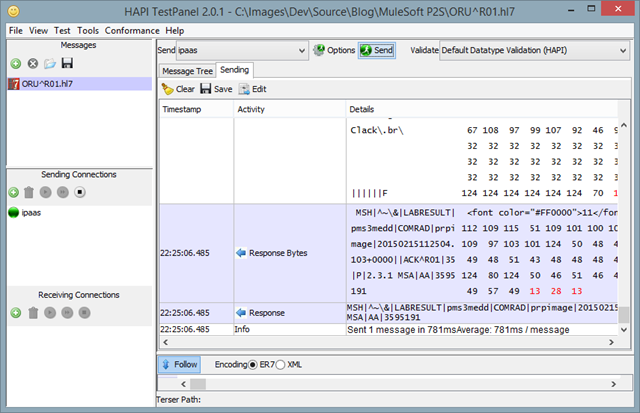 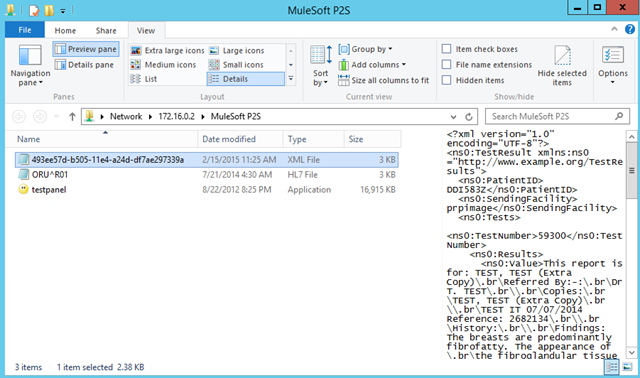 In this post I have demonstrated how we can use Microsoft Azure to run a Mule ESB DEV/TEST environment using point-to-site VPNs for simple connectivity between on-premises resources and servers in the cloud. Provisioning integration DEV/TEST environments on demand increases infrastructure agility, removes those long lead times whenever projects kick-off or resources change and enforces a greater level of standardisation across the team which all improve the development lifecycle, even for integration projects!